25 years since I woke up trembling. 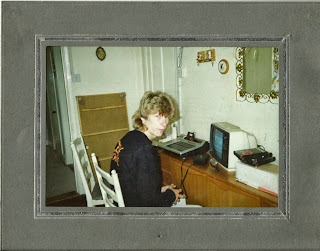 Twenty five years ago on a dark and rainy night, my life changed forever.  A quarter of a century, almost half my life!

I remember it fairly well and I normally have difficullty remembering things that happened last week, last month, six months ago.  But that night, was botht the longest and the shortest night of my life.

That night my then boyfriend was killed in a motorcycle accident, nobody really knows what happened apart from Ricky and the other guy.

I had been staying at my brothers in Stowmarket all week and was meant to be going home on the Saturday, but for some reason I wanted to go home this day.  I remember catching the bus, I was only 16, arriving at my house and changed to catch another bus,this is one thing I don't properly remember; whether I caught the bus or Alison's Dad gave us a lift, either way I turned up to Ricky's house and he wasn't there; that wasn't a big deal as he wasn't expecting me, but he was going to be home soon, he hadn't had his dinner yet.  Six o'clock rolled by and Rick still wasn't home, after this time becomes a blur.  We were waiting and waiting still nothing.

Suddenly there was loud banging on the door, Yvonne went to answer and someone said 'come quick, Ricky's been in an accident'.  We followed them to where the accident was, a couple of doors down from where his brother and sister-in-law lived.  I distinctly remember though when I got there I was so so pissed off as there was someone else holding his hand, I kept thinking to myself 'I'm his girlfriend, I should be holding his hand'.  Someone told us that the ambulance had been rung and we were to just wait.  Apparently Rick had been up and walking and trying to get his helmet off, but he was guided to the floor and that was where he was when we turned up.

There were a few people around, Rick was a fairly popular guy and the family was well known within the village.  I recall that lots of people were moaning about the length of time the ambulance was taking in getting to the accident.  Looking around you still couldn't see how the accident had happened.  I just remember waiting, waiting for the ambulance to turn up.

Over an hour later the ambulance did come and then we had to wait again for the guys to work on Rick, that moment they put him in the door and shit it was hell.  Nobody had a clue what was going on, you know a broken collar bone or arm shouldn't be too problematic could it?  About 10 minutes later the door opened and we were asked who was going with him, Yvonne and I said we would and Bob would follow along in the car, we would need a lift home later after all.

I told the ambulacemen (they weren't paramedics then) that I suffered badly from travel sickness he strapped me in and gave me a bowl, Yvonne sat on the seat opposite me nearest to Ricky and the ambulanceman was still working on him.  The guy in the front shouted through to us and asked if we could give them directions on how to get back on the main road to get the hospital.  This was the reason the ambulance was so late, they had come from another county as all the ambulances were all out that night on other calls.  We hollered through where to go and which road to take.  Halfway along the A45, as it was called then, the ambulanceman, started slightly shaking Rick and calling his name and then spoke through do the driver to tell him to put his foot down and to put the blue lights on.  I think then it started to hit me, just how bad it really was.  I started then to call out as well, there was no response.

We arrived to at the hospital and Rick was taken away and Yvonne and I were led to a waiting room.  These were the days we were allowed to smoke, so smoke I did.  Again it was a waiting game, this time we were waiting for Bob to arrive, see if he had been told anything before he came to see us, he hadn't.  So we had to wait for a doctor.  This small roomseemed to get smaller and smokier and the waiting seemed to be taking forever.  I was sat there with Rick's Mum and Dad, not really knowing what to say.  Then the door opened.

Do you know how absolutely devastating those two words are?  At that moment the waiting stopped, time stopped.  I ran out of the room, I screamed, I locked myself in the toilet.  I had know idea what was happening.  Ricky couldn't be dead, he was only 16.  Sixteen year olds don't die.  Someone got me out of the toilet and took me back to the room.  We were asked if we wanted to see him, now he had been cleaned up.

We walked into this clean clinical room and there he was.  Laying there.  A sheet pulled up to his shoulders.  When people tell you that 'they' look so peavceful when they are dead, they lie.  It's bollocks.  Rick didn't look asleep, he didn't look peaceful.  He didn't even look like him.  He looked bigger, larger, more full is the only way I can describe it.  But he was still, very very still.  As I walked around the bed someone must have hit the bottom and the bed moved, Rick moved.  At that time all I could think of was Rick moved.  Except he hadn't.  He couldn't, not any more.  I wanted to stay, to hold his hand, just never leave.  We were told that we weren't allowed to move the covers, to look at anything other than his face.

My memories of this night are fading, it is taking time.  But my memories are still there, they just don't hurt as much.  Occasionally soemthing will remind me and I will choke up.  That burning feeling you get at the back of your eyes.  I did manage to listen to Black Sabbath's Changes and not cry, but I am still yet to try Bon Jovi's Never Say Goodbye.

Since then I have never been the same, but since then I actually became who I am today.

25 years since that terrible dream.