Do you get bored with the daily meat and two veg?
Do you want to eat more interestingly but somethimes just don't have the energy to think about cooking?
Do you want a cheap meal for your family?

I try to feed our family well, we don't have the most amount of spare money but I really don't like to feed cheap food to the family, especially the kids (yep my nineteen year old is still a kid!) so we very rarely use processed food but unfortunately sometimes I am a little tired or bored with the standard meat and two veg so I like to try new things, which can become exspensive if you have a fussy family (I'm rolling my eyes as I say this as I know what it's like to have a fussy family.)

In walks Schwartz, it isn't often I use packets but sometimes when your mind is a blank and the family is screaming for food I will reach for some packets I have for such occasions.
I managed to snag myelf a couple of Schwartz 2in1 mixes and I pulled out this one Mediterranean Chicken Pasta and Cheesy Crumb Topping. 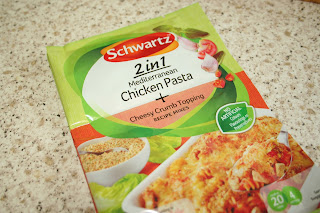 Sometimes I find mixes a little sweet, but this was nothing like that.  Whilst cooking I could smell all the herbs and spices that were in the mix.  The only thing that I would suggest it to properly read the instructions and ingredients so you don't make the mistake I did and added uncooked pasta!  I was able to rescue it and cooked the pasta and then added it to the mix. 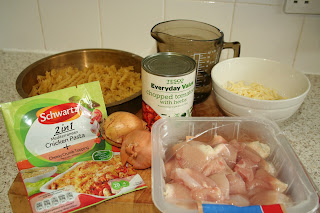 As you can see there isn't too much to these meals so they are quick and easy and also really quite reasonable.  This meal worked out at £5.27 (Schwartz mix 65p, onions 34p, Chicken £3.33, chopped tomatoes 31p, cheese 52p, pasta 12p)  this is for a 4 serving packet but we managed to have leftovers for the four of us, which did get eaten as it really was delicious. 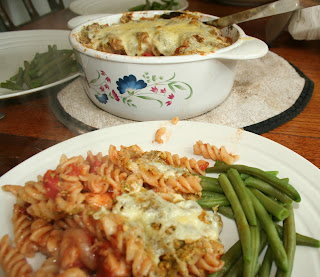 I think this is a really good way of mixing up old favourites of meals that would ordinarily be in your repetoire.  There are five sachets in the 2in1 range Chicken Tikka + Mint Cucumber Raita, Garlic and Herb Crunchy Chicken bites + Cheese and Chive Dip, Garlic and Thyme Roast Chicken + Crispy Roast Potatoes, Southern - Style Crunchy Chicken Bites + BBQ dips and the mix I used Mediterranean Chicken Pasta + Cheesy Crumb Topping.


Do you think there is anything in the Schwartz 2in1 range that you would like to try?  I also have the sachet for Garlic and Thyme Roast Chicken, which I think I will be trying next Sunday.


This post is an entry for BritMums ‘What’s for Dinner Tonight?’ sponsored by Schwartz. Find out more about the new 2in1 mixes here
Posted by Cordelia Earle at 12:49