What is Caroline not?

Today has mainly been about this: 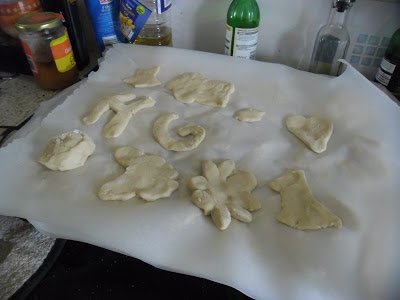 Today was craft club and on this tray covered in parchment paper are three layers of salt dough 'shapes', I emphasise the shapes because some of them now they have been carted home and taken out of the container are, let's just say, odd!
Each week we do try to think of something different for the children to do, as there are different ages, ranging from Reception/Year One right through to Year Four, we have to think of something suitable for all.  Last week I wasn't there as I have been having the worst migraines (that's a whole other problem), the day after the other Mum, Craft Guider Mrs J, who runs it with me, told me she was away this week and I needed to think of something to do.  Well I got the email on Thursday, I had plenty of time to think of something didn't I?  Sunday night I still hadn't decided on anything, woops better get my thinking hat on.
*ting* (that's an idea sparking up) Salt dough, that'll OK surely, that's totally easy.  Tuesday had me rushing around, yep you guessed it, no ingredients! Well everything all sorted I carefully measured out and got stuck in.  Bad idea, you see I pick my fingers, you know the cuticle bits and when gardening I cut myself lots (I am particularly clumsy).  Well what have I stuck my hands in?  Yep, salt oooouuuuccccchhhhhh, well in for a penny in for pound and pounding I did (see what I did there?).  After kneading for what felt like 3 hours I had 5lb of salt dough and burning hands.
Now I bet you are all thinking, ahh this is why Caroline isn't a clever bunny, she forgot the salt/cut mash up?

Nope wrong there.  The uncleverness happened when I got to school.  On Facebook a lovely Mum (MrsW) kindly offered to bring in some cutters, so there I was a a school desk, on a warm day, flour on the table sticky salt dough on my hands and by now on most of the table.  I have my fantastic collection of cutters, now when I say 'collection' I actually mean 5 Halloween cutters, 2 Christmas themed ones and a random Dalek!  Yep what the Domestic Goddess I am.  And then in strolls Mrs W with what I can only describe as a dustbin full of cookie cutters, now don't I feel a failure.  Never having made salt dough before a horrid sticky mess in front of me and me stuttering 'it just seems so sticky and I keep adding flour'.  Genius Mrs W and the ever so 'Martha Stewartesque' Mrs S both pick up a third and start kneading.  Nothing, no stickiness, no flour spilt down trousers, just lovely looking soft salt dough!  With my head hanging in shame I walk to the sink and wash my hands.
Next thing I know about 13216564356405 children come in (a probable exaggeration, but when they are all talking to you at the same time then it seems a lot). Warm day, just after they have eaten their lunch, you guessed it, sticky hands.  GMW (Genius Mrs W), instead of going with my idea of letting the children help themselves to a little bit of flour from the bag, suggested that a little bit flour on the table where the children could put their hands ON, was probably a better idea.  See this is going brilliantly there couldn't possibly anything wrong with this idea, creative children, enough cutters to go around.  You'd think wouldn't you?  I have one child shouting that they wanted the cupcake cutter, then another one asking for the 'A'.  Someone else had taken all the left over dough that she had been using and they were certain who it was but wasn't sure? if they had taken in.  Well I let them get on with it and GMW and MSMS ('Martha Stewartesque' Mrs S, can you see a theme?) are available to watch over whilst I write the initials of each child on the back of their creation.  I thought that would be easy enough to do at least but apparently Biro doesn't write on dough.  I persevere and then carefully put a little bit of flour on each bit and place them in a container to take home and bake.  Oops children see me putting flour on said decorations and they start to do it too.  I look up and I think I may well have detention next week, there is flour and bits of dough on the floor, that's not too bad you say?, well no it wouldn't be if we weren't on CARPET!
Children are becoming quieter, that must mean it is getting to the end of lunch time they are washing their hands and leaving.  Now breathe.  As I look around at the mess that is left I turn to GMW and MSMS and declare, 'Salt dough wasn't such a hot idea was it?'  And with a grin on her face, do you know what GMW said 'Yeah, I had already spoken to CGMJ (see above) about salt dough and she just said, meh'!!!!


Thanks ladies.
Posted by Cordelia Earle at 20:01