Photo catch up required I think.  Boxing day I came down with the Norovirus and as of today I’m still on antibiotics as I have a ‘windpipe’ infection, yep that’s what the doctor called it so hades only knows what that means.  I’m still feeling a bit meh if I do too much, and still sleepy, but at least I’m not feeling sick any more, which is a good thing. It did mean that the first two weeks of January I ate nothing but fruit and squash as these were the only things that didn’t make me gag and since then I haven’t really eaten lots of the crap food that I tended to live on, so all in all the beginning of the year had some bad and good things.

Firstly there will be Christmas photos as I haven’t put any online anywhere so although they may seem a little out of date they aren’t really as it hasn’t even been a month since Christmas day even though it seems an age away.

These were the last few days of Christmas photos that I had taken.  My favourite one from above was the fire one, as this was actually a DVD as we don’t have a real fire in our house, playing the DVD though made the living room look particularly cosy, especially if you had a few candle burning also, which I did!

A few from Christmas day and Boxing day: 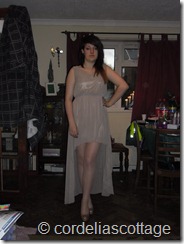 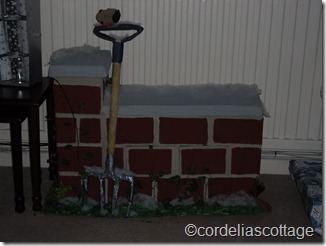 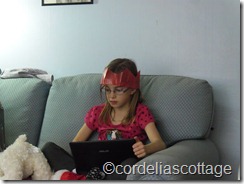 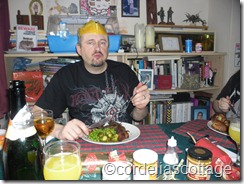 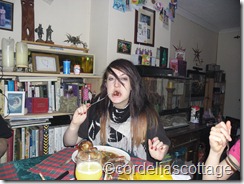 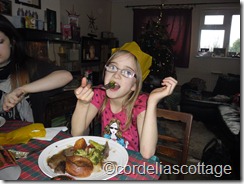 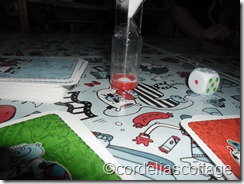 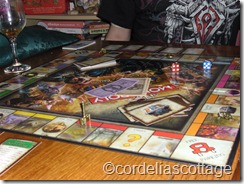 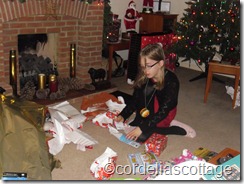 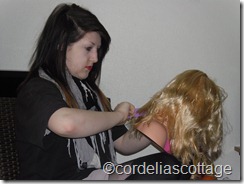 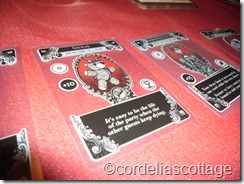 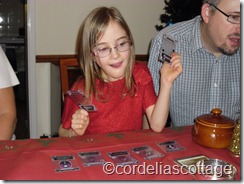 We really had a nice family Christmas.  The second picture in was something my Mum received.  Every year the High School in the town she lives has a collection from the whole school of food tins/packets/jars etc.. and then they have Hampers made up and sent to all the old people who live in Sheltered Accommodation in the town.  They tend to have competitions in their class houses as to which class can come up with the best idea for decorating the hampers so each year my Mum has really received some good boxes and this was this years, it had a hand made shovel, crocheted robin and there were two doors that opened.  Sometimes it seems a shame to get rid of them.

We, as a family got some good presents this year, as normal board games are played on Christmas day, we always get the girls a joint present which is normally board game this year it was Pictureka

a good game as it means you can be quite loud and competitive, something we as a family are.  Also received Monopoly World of Warcraft

which of course had to be played.  The game I received myself which I had on my Amazon wishlist came courtesy of Eveigh and was Gloom

, which is kind of a story telling card game, this is shown in the last two photos and as you can see the cards are plastic and seethrough, the aim of the game is to kill off your family in unfortunate circumstances and very Gothic game.  I highly recommend it you can see Wil Wheaton and guests play it here on Geek and Sundry’s Tabletop YouTube channel, which I was religiously, we have bought three games now because of these recommendations.  As you can see Grace really got involved in the game, even Mark, who said that he would just put the cards down and not get involved in the story line, started to tell stories in the end!

After that my Christmas and New Year started to go down as I really got ill.  As I said I am getting better now.  Tomorrow I really want to go for a bit of a walk, we have had a lot of snow and I love nothing more than taking the dogs out in the snow with the girls.  By the looks of the roads this evening and the fact that it is still snowing and has been all day I’m not sure they will be going to school and work as I don’t think we will be getting out of the village.  If we are walking out tomorrow then you can expect photos.  We went shopping on Tuesday though and that completely wiped me out, so I really want to be a bit better again to be able to walk a bit tomorrow.

Also tomorrow I’m wanting to make some Valentines cards and put up on here and also on Etsy, not your normal types though, we’ll see how it goes, I may have left it too late.

Well I think that’s enough for today, thanks for bearing with me.