Jack Frost Nipping at your Nose

It’s been a couple of days since I posted, the beginning of the week is always like that for me as we don’t tend to do anything exciting just catch up on housework and chores, and seeing as I haven’t really got anything planned I thought I would share a crafty idea with you.

Bit of a back story first, are you sitting comfortably, then I’ll begin…

Now, I love Christmas.  My excitement about Christmas has been warped by the way my upbringing was and I shall tell you why.  When I was growing up my Dad seemed to ruin Christmas for us.  My two older brothers had already moved out, I think they had both gone by the time I was around six or seven, so it was my older Sister and one older Brother, both of whom are around ten years older than me; yep I was an accident (that’s a whole other story.)  Well the Brother who was still at home was both mentally and physically handicapped (before you start with the whole PC thing, I have always called him this and as such I have no idea what the correct term is!) and for whatever reason was treated so differently by my Dad.  My Sister was adopted, she is black and my Dad is quite possibly the most racist person in the world, so you can see what we are up against.  Any way back to the back story.

Now the rest of the family treated my Brother ‘normally’, we didn’t pussyfoot around him, nor did we treat him with kid gloves, but my Dad did and as handicapped as my Brother was I believe he knew that he could wrap my Dad around his little finger.  To a degree I guess I resented him, yep not such a ‘big’ thing to own up to, but ask my family and I guess I was resented a bit too, the baby of the family, the cute blonde haired blue eyed child, who probably got away with much more than the others did just because by the time I came around my parents were so much older they treated me a little more relaxedly, (I checked on dictionary.com, this is a real word, who knew!)

It got to the point that, at Christmas, he was bought two lots of presents because we knew that he would most likely break his presents and apparently it was easier to give him something new than to tell him tough.  My Dad was under the impression that he wouldn’t understand, well as I said my Brother knew.

Well come Christmas we already were a tightly wound up family as routine was out the window, we were brought up knowing that between certain hours we weren’t allowed to talk because Dad was watching the news, we were brought up not being allowed to play in our front garden because we may ruin the grass, we weren’t even allowed to walk on the grass, in fact to this day Mark still laughs at me because I walk all the way round our front garden on the path as I don’t want to walk on the grass.  So Christmas morning, we weren’t allowed to get up before Dad did, and we weren’t allowed to open presents until breakfast was had, we did get a lovely full English Christmas morning, thanks Mum.  When we opened our presents, and this is the bit that gets me and to this day I fully rebel against it, we weren’t allowed to make a mess with the paper, as soon as it was off the present even BEFORE we looked at our presents we had to screw it up and throw it in a black bin liner so as not to make a mess on the floor.  Why this bothered my Dad so much I have no idea as he never lifted a finger to help with any kind of housework any way (now that is another whole different story.)

Well I make sure that our little family Christmas is much more memorable.  Each year all of us get new Christmas pyjamas, I know that this is a huge tradition that a lot of people have but I really look forward to my snuggly Christmas pyjamas.  We also buy a new Christmas film to watch, this is getting harder each year as you can imagine.  Over the last couple of years we have also been going to the cinema as a family, to watch the Christmas film that’s out.  Last year we saw Arthur Christmas, which I really enjoyed, Mark not so much, and this year we are off to see The Rise of the Guardians.  Christmas really starts on the 1st of December for us too, every day in the car when we take grace to school, and this year, Eveigh to work we have Christmas music/carols/songs playing, nothing else no radio, nothing.  We also made up a game, which has been going on for a few years, in fact it started when Eveigh was in middle school which was at least eight years ago.  This we even played with our neighbour in the car when we used to bring him home from school too.  When you are driving along and you see a house with Christmas decorations on or Christmas lights showing you have to shout out ‘Reindeer’, you have to be the first to shout it and you win a point, one year it became a little raucous and Eveigh and the neighbour decided that if you didn’t win the point then you got a slap, well this didn’t last long let me tell you.  Also we get a twisted enjoyment in watching the cheesy films on the Christmas channels on Sky, I mean dodgy Christmas films 24 hours a day, what could be better.

Then Christmas Eve is a whirlwind of making sure we have everything for the next day, if not we normally send Mark to the shops to pick up anything forgotten, he is much better at dealing with crowds than me.  This year I have invited the family over for Christmas Eve for nibbles and mulled wine.  I have yet to hear from them to see what is happening.  Then Grace and I take ourselves off to Church for the Christmas Eve Service, Grace loves to do this we have taken her here since she was born.  Then when we get home we make sure that everyone has had a shower, we all get into our new pyjamas and snuggle on the sofa with the lights out and a blanket over us all ready to watch the yearly Christmas film.

Once the film is over, we put out a gingerbread biscuit and glass of milk for Santa and put reindeer food out on the front garden for the reindeer, along with a Santa stop here sign, also the reindeer get a carrot.  We don’t have a fireplace here but we do have a DVD which has a burning fire on it and that is left on where the fireplace was and the stockings are laid by this.  Eveigh then reads us ‘Twas the Night Before Christmas, from her now old book and then the girls go off to bed, well Grace to bed Eveigh just takes herself off to her bedroom and Mark and I are left to finish anything off for the next day and just to have a relaxing evening together.

Our girls are always up first, which is quite a miracle for Eveigh as she tends to sleep forever the rest of the year, and they run downstairs to see if Santa has come and return to our bedroom to sit on our bed and open there stocking presents, taking great delight at the pencils and colouring books and smellies that Santa seems to bring them every year.  I’m certain they take greater pleasure in these presents than they do with their ‘real’ presents.

And then Christmas day begins.  We don’t have a lot of money but to me the build up of Christmas is as important in the excitement of Christmas day itself.  For me Christmas is a time of families and love not for showing who can spend the most money and who can get the biggest amount of presents.  Building up a magical time costs no money.  Christmas for me is for the children whether they be eight, eighteen or eighty for when it comes to Christmas there is a child in all of us.

So back to my crafty bit.

I wanted a wreath for my door but didn’t want one that was overly Christmasy, one that was different from your normal holly and tinsel and one that didn’t cost too much money!

This is what I came up with.  The wreath itself was made from some pipe lagging, but you could use a swimming noodle too, it’s just what we had to hand.  I inserted a piece of wood in the whole and then gaffa taped it together, then wound around it a cream scarf with the tassels just off centre at the bottom, I sewed a few small stitches to keep it together which can easily be removed after Christmas.  Then I had a small pair of cream gloves which I also slip stitched to the scarf and added a pinecone, of which I had many, and some sprigs of plastic holly and mistletoe which I picked up for about 50p from some shop.  Used a thick piece of gold ribbon to make a box and stitched that also to the top of the wreath and used some of the ribbon as a fake loop to hang it.  The weight of the wreath pulled down on the scarf and stretched it so under the ribbon is some braided wool as the actual loop that takes the weight and the ribbon is for show.  Finally added a couple of pom poms I made and voila, a cheap but pretty, in my opinion, festive wreath.

And just so this isn’t such a depressing deep post I thought I would share with you the beauty that is out there today, even from my boring miserable garden. 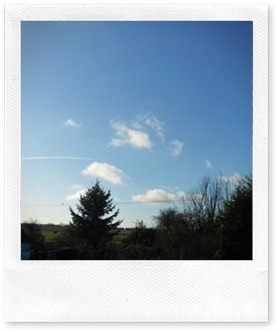 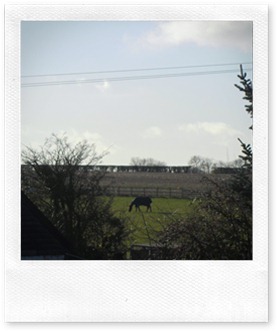 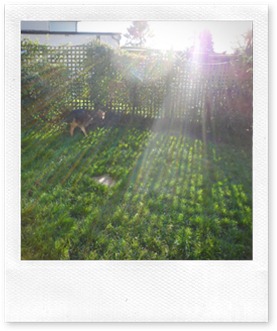 Even something as mundane as a fence can shine with beauty.

Go outside, appreciate it and NEVER take anything for granted.