Well I didn’t manage to get online yesterday as I had the most excruciating migraine.
I didn’t even manage to get to Weight Watchers so I have no idea if or how well I did this week!  And all the new goodies were there so I missed them.
I managed to go to Stitch and Bitch for a while, where I managed to pick up some goodies, which I will show later.
I just spent a lazy day in bed and then my head got progressively worse, it got to the point where I was checking myself for a rash.  I do often get migraines but this one was by far the worst, the scary thing was I necked a couple of Ibuprofen and cover my head in pillows and laid with no covers on, woke up 4 hours later and felt a lot better but had the after effects that always follow, I didn’t manage a good nights sleep, but then I never do, so I have downloaded an app for my new phone, which should record my sleep patterns and I think will wake me up slowly in the right time for my sleep cycle so hopefully won’t feel so tired in the mornings.
Today never really happened much today either, managed a bit of knitting for my Mummy’s birthday present and made a yummy dinner of chicken cooked in pepper and lime juice, with home made oven chips and salad.
As not much has happened let me just get right on with the photos for the 365! 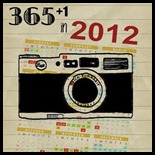 This one was hard to do as we didn’t have any frost at all today, but as I was getting the chicken out of the freezer I realised that I may have to defrost in there as it does seem to be a little frosty.  (I hope this counts.)

Well toodle pips and catch you on the flip side, is anyone doing anything special at the weekend????