This could take a while…

Firstly, let me say, if you are reading this from Blogger, what do you think of the new layout?  I like it, quite pretty and dainty, not really like me at all!!

If you are reading this from LiveJournal, sorry still the same old boring Journal.

Well where have I been and what have I been doing.  Looking back it really doesn’t seem that I have actually done anything, but I also seem to have not had any time.  I must be in a vortex or something, swirling around not knowing where I am going or when I will stop.

As I said in a previous post I was rushed to hospital with severe chest pains and after a brief ECG there was pointed out that I had some heart abnormality.  I can’t remember what it was they said now something possibly to do with the lower v.. anyways, since then I have had a treadmill test, which I am afraid to say I failed.  I managed to get my heart rate up but couldn’t sustain it for long enough to be conclusive so will have to go back for some dye/scan thing.  Haven’t had that appointment through yet.  In the meantime, Tuesday of this week I was rushed into hospital again with same chest pains (Cardio guy said if I had the pains again and they lasted for more than twenty minutes I was to go in ‘just in case’) this time they did the ECG and couldn’t find anything wrong (my family on my Mum’s side have a history of angina, so yeah have been a bit worried.)  They have put it down to possible stomach ulcer, and have sent a letter to my GP getting me to possibly have a camera down my throat to have a look, something which they have already done at the beginning of the year and found nothing, (let me tell you if you ever have to have a camera down your throat and they ask if you want to be ‘knocked out’ take that option it is one of the nastiest things I have ever had done) not looking forward to that as you can imagine.

Now to get back to the on-going saga of my side pain, started last July manifesting itself as a virus and then becoming this pain in my side, which no-one could find any explanation for, even though I have had ultra-sound scan (which is how they found out about the Focal Nodular Hyperplasia, which in itself was scary when my GP told me they had found a ‘shadow’ on my liver) and then I had an MRI scan, well two in total, which have shown that my tumours haven’t grown but still doesn’t show that there is anything which could be causing the pain, which if anyone wanted to know runs along my lowest left rib and has since spread to my lower right rib too.  Well this morning we went to see ANOTHER consultant about it, this one is all to do with pain management to see if there is anyway the pain can be controlled, as even though I am on pain killers and pain killing patches the pain is still there, and this guy asked a few questions and has stated that the pain is a type of neuralgia (I forget the correct term he used) but basically I have nerve damage and I can either carry on as I am for a while and wait until a new treatment comes out, which he doesn’t know how long will take, or I can start by having some pain relieving injections which, hopefully, will ‘kickstart’ my nerves back in to working.  I feel better having seen this man for twenty minutes than any of the other people who I have seen so I hope these injections work.  I know that they may be painful after they have been given but in the long run they should work.

So what else have I been up to?

Well I am still attending Weight Watchers and am one pound short of reaching one and a half stone lost!! Woot.  And I was asked by the leader to be one of her helpers, so now I run the shop at the meeting, my leader Sam is the most wonderful inspiring woman I have ever met and is so, so lovely I am glad to have found her.

Still making things, really enjoying knitting, especially as I have finally finished my first ‘proper’ pattern, which was originally a 1970’s knitted dressing gown, so I just altered some of the sizes, sleeve length, overall length and made Gracie a brightly coloured pixie cardi, what do you think?

I also found this really cool book in a charity shop, you know me and charity shops! Well I am hoping this will help me when I FINALLY get around to making clothes (yep yet another thing I haven’t got around to doing) this weekend I will be attempting to make my now too big jeans into jeans which actually fit.

I must apologise in advance of the photo spamming, but I seem to remember things that happen to me by the way of what photos I have.  Normally my days all seem to blend into one, which is why I tend to take photos of things that I want to remember.

I will leave it there for now, before boring you with even more photos and such, but before the final farewell, I have this moment, well last weekend, managed to like the way I look so I will leave you with a photo of how I looked on a visit to the V&A in London.  Excuse the jeans, as I said all jeans now are too big! 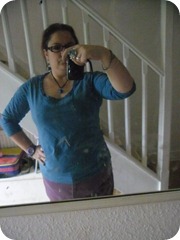 Thanks for taking the time to read and share a little bit of my world.